skip to main | skip to sidebar

Barack Obama chose Rick Warren to give the invocation at his inauguration. The AP is reporting that not everyone is happy about this. Some liberal groups who are advocates of gay rights are very upset. I'm sure that some conservative Christians are not happy with Warren for being agreeable with Obama.

I am glad that they both represent a willingness to dialogue with others who think differently. This is better then those who shoot arrows from a far, but never get in close enough to get to know people who are different then them. This will upset the extreme left or the extreme right who don't see a point in trying to understand each other.

How do you feel that Obama chose Pastor Warren to be a part of the inauguration?
Posted by KG at 11:10 AM 1 comment:

In this gift giving season,it is a great time to remember the greatest gift ever given.

"For God so loved the world that he GAVE his one and only Son, that whoever believes in him shall not perish but have eternal life."
Posted by KG at 3:23 PM No comments:

"The mystery of the humanity of Christ, that He sunk Himself into our flesh, is beyond all human understanding."
Martin Luther
Posted by KG at 10:50 AM No comments:

A statement like this sounds so shocking. A man who has been a leader of such evil. But isn't this what the Bible calls us to do. Doesn't Jesus teach us to love our enemies? (Matthew 5:43,44) Doesn't Paul tell us to bless those who persecute you, bless and do not curse? (Romans 12:14) Doesn't Peter tell us to return evil and insult with a blessing? (I Peter 3:9) Isn't loving those who do us evil the core of who God is calling us to be?

This is not only hard for an enemy like Bin Laden, but is difficult in everyday relationships. Can you take an insult and return a kind word? Do you seek to do good to those who have wronged you?

Do you think that God is calling Christians to love Osama Bin Laden?
Is He calling us to love the person who has done wrong to us?
How do you practically show love to someone who mistreats you?
Posted by KG at 10:10 AM 1 comment:

This is a promo for the Christian Community Development Association which is a group of churches and organizations involved in engaging the needs of the poor in the name of Jesus. Find out more at ccda.org

Caring for "the poor"

Is it wrong to talk about “the poor” as a category? Many Christians, myself included, talk about our responsibility as the children of God to care for the poor. God’s heart for the poor is referenced from what is stated in the Word of God. Christian compassion is at the core of who we are as believers.

But something doesn’t feel quite right about talking about “the poor” or “the oppressed” as a category. It seems in some way demeaning. It gives the impression that they are less than. I get the feeling that to talk about the poor puts a separation of them and us as if they are different.

This becomes especially difficult when you know people who would be considered “the poor”. They are your friends. They are people you live close to.
To me, it is hard to hear them described as “the poor”. I think of them as … my neighbor, or someone I who is a part of our church, or as John Doe (insert any person’s name). It seems that there is a tension to speak of “the poor”, when the poor are the people you relate to. They are who you associate with.

Is it helpful to talk about the poor as a category or does that already cause us to treat them as different? Does anyone else relate to this tension that I am describing?
Posted by KG at 10:14 AM No comments:

Labels: Compassion for the poor, My life

Governor arrested by the Feds

This morning, the Governor of Illinois, Rod Blagojevich, was taken into custody by the Feds on corruption charges. Our former Governor, George Ryan, is already in federal prison on corruption charges. Welcome to politics in the land of Lincoln. There is obviously a heritage of corruption in how business is run in the government of our state.

What is your reaction to the news today? Does it concern anyone that this is where Obama cut his political teeth?
Posted by KG at 9:48 AM No comments:

"Love without truth is hypocrisy, and truth without love is brutality".
Posted by KG at 9:54 PM No comments:

We are going through the book of I Peter as a church. Sunday, we will be looking at I Peter 3:1-7.

Wives, in the same way be submissive to your husbands so that, if any of them do not believe the word, they may be won over without words by the behavior of their wives, when they see the purity and reverence of your lives. Your beauty should not come from outward adornment, such as braided hair and the wearing of gold jewelry and fine clothes. Instead, it should be that of your inner self, the unfading beauty of a gentle and quiet spirit, which is of great worth in God's sight. For this is the way the holy women of the past who put their hope in God used to make themselves beautiful. They were submissive to their own husbands, like Sarah, who obeyed Abraham and called him her master. You are her daughters if you do what is right and do not give way to fear.
Husbands, in the same way be considerate as you live with your wives, and treat them with respect as the weaker partner and as heirs with you of the gracious gift of life, so that nothing will hinder your prayers.

There is a lot there. Any thoughts?
Posted by KG at 9:49 PM No comments: 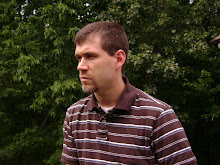 KG
Chicago, IL
I love God, I love my family, I love my church, and I love my community. I am one of the elders of Lighthouse Christian Fellowship on the west side of Chicago. I also lead a program called PURSUE Scholars.